My friend Monique is a makeup artist. We hung out on Saturday night and just talked makeup, nails, about other makeup/nail blogs for hours and we had such a blast! She taught me a new look that I could try out which she called the cut crease. I tried it that night, so this is my second attempt you will have to let me know how I did. I do know that I blended more than I probably should have for this to be called a real cut crease, so you be the judge.

You will need an eye liner that is pretty creamy, that will glide on easily and will be easy to smudge and blend in. An eye shadow that is pretty close to that color if not a perfect match, and a more drastic lighter color for the lid and under brow. Then a liner either matching the first liner, or something again very similar.

Step 1: With your eye open, take the creamy like eye liner and trace a line a few hairs above your open crease, as well as a straight line down from that to the corner of your eye. Only go in about a third of the way, you can smudge it further later.

Step 2: With a blending brush, blend the liner in a soft and somewhat circular motion and upward. This will keep the liner and shadow away from the crease to give it that defined look.

Step 4: Dab your matching shadow over that area and blend in again upward.

Step 5: Take your lighter shadow, (white shown here) and apply to the lid and under the brow

Step 7: Mascara and go back to blend and perfect any lines or smudges you want to.

Here is my final look. I am not a big fan of grays on my eyes and as I said I think that I blended more than I probably should have for a cut crease- It’s supposed to be more dramatic. What do you think?

The “UD Primer potion” was used first, then the liner  was “Urban Decay 24/7 Double ended Glide-on eye liner in Uzi”, the shadow was a white no name by Ulta (this was part of a make up set I had gotten as a gift, so just a standard white), and the liner for the crease the name escapes me, if you really would like to know, please stop back later,  I will update tonight because I left the name at home. Of course mascara is Urban Decay Super Curl Curling Mascara.

Exclusive Mae’s Beauty followers Born Pretty Coupon. Click the link below and type in the code when checking out 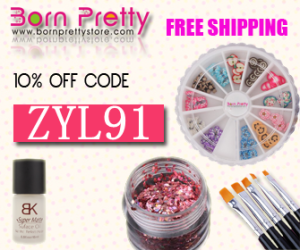